Even though Indian shows like ‘Lust Stories’ and ‘Sacred Games’ were nominated in various categories at the 47th Emmy Awards., it was Nawazuddin Siddique’s ‘McMafia’ that won the award for ‘Best Drama Series’.

The 47th Emmy Awards were a star-studded event with the entire cast of ‘Lust Stories’ and ‘Sacred Games’ in attendance. Radhika Apte, Nawazuddin Siddique, Anurag Kashyap, Kubbra Sait, Karan Johar, Zoya Akhtar were amongst others who attended the prestigious award ceremony in New york.

Despite multiple nominations, neither ‘Sacred Games’ nor ‘Lust Stories’ won any awards but nonetheless it was a moment of pride and honour for the makers of the shows. The Indians rejoiced in delight as Nawazuddin Siddique’s starrer U.K based show ‘McMafia’ won the ‘Best Drama Series’. The show beat Nawazuddin’s Indian show ‘Sacred Games’ to eventually bag the prestigious award.

Nawazuddin took to social media to express gratitude and happiness on winning big at the 47th Emmy Awards. He even shared images with his co-stars smiling their way through glory in New York.

Netflix star Radhika Apte took to Instagram to share a picture of Team Lust Stories and Sacred Games looking all poised and polished under the starlit sky of New York City. The Indians sure seem to look their fashionable best in the picture shared.

The filmmaker Karan Johar also took to Instagram to share his #OOTN from the 47th Emmy Awards. The director looked radiant in his black and maroon embroidered attire. Karan Johar along with Anura Kashyap also got a chance to interact with Game of Thrones director David Benioff and D.B. Weiss.

Headed to the International Emmys #iemmys in @dolcegabbana Styled by @nikitajaisinghani !!! 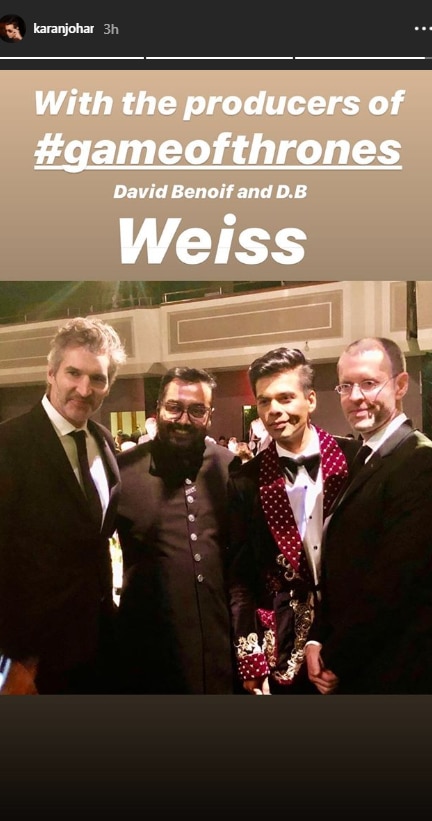 ‘Sacred Games’ star ‘Coockoo’ aka Kubra Sait too shared her look on Twitter. As per her caption, the moment was ‘unreal.

This in itself is UNREAL.
❤️ https://t.co/38bkGMZjID