Akshay Kumar attracts flak as he ‘likes’ a video that mocks the attacks on Jamia Milia Islamia students who have been protesting against the Citizenship Amendment Act 2019.

The entire industry has come together as one to discourage the deadly protests but it seems ‘Gold’ star Akshay Kumar is aloof. The actor had apparently ‘liked’ a video that mocked the Jamia Milia Islamia students attacks. This has attracted major flak for the ‘Kesari’ star who is claimed as the ‘most-patriotic’ star of all times. 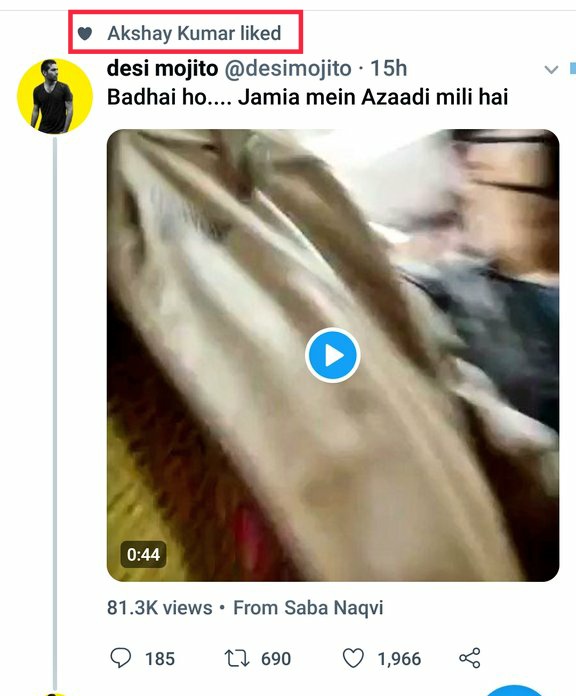 The fans are in utter shock to see their Khiladi Kumar’s adverse behavior. The Twitterati have left no stone upturned to bring down Akshay Kumar for his activity. Even though Akshay took to Twitter to issue an apology for ‘accidently’ liking the video, the fans are in no mood to spare the man. Tweets filled with hate, mockery about his Canadian citizenship and fake patriotism are trending on Twitter under the hashtag #JamiaProtest and #BoycottCanadianKumar.

You were scrolling your TL all the way from Canada, where you follow hate filled bigots spewing venom here? You're the accident

Do you follow people who endorse such things against students ? #BoycottAkshayKumar #BoycottCanadianKumar

The fans have been quick enough in condeminng Akshay’s act as heartless, fake and instigating while the star continues to prove his innocence. On the other hand, a certain section of the Tweeples are standing in support of the ‘Housefull’ hero by tweeting with #ISupportAkshay. With 41K+ tweets the hashtag is trending at top spot in India.

#ISupportAkshay because this guy has a heart of gold, aisa kuch kar hi nahi sakta🙏🕉️🙏

This is Akshay Kumar.
But you can not understand.#ISupportAkshay pic.twitter.com/kUbxDRdG32

Hey haters , just take out ur 30 swconds and watch wht he is saying about his DONATIONS.

He is literally so down to earth, he could have easily made a show off for his donations. But look at his simplicity.

I'm a realist. Where I come from, 'phenomenons' don't exist. I'm from a land where people make mistakes and try again, harder, faster; where negativity is not an option- @akshaykumar sir#ISupportAkshay

There Is No One Reason , There Are Uncountable Reasons Why I Am Proud To Be An AKKIAN

WE LOVE YOU AKSHAY KUMAR#ISupportAkshay

For the uninitiated, Jamia Milia Islamia students are currently protesting against the Citizenship Amendment ct 2019 that seeks to provide citizenship to non-Muslims religious minorities from three neighboring countries who arrived in India to escape religious persecution. The protests turned serious when the students came to blows with the police officers who enforced lathi charge and tear gas on them.

According to reports, the protesters had torched up 4 public buses and two police vehicles near Friends Colony area in Delhi. On Sunday, two firemen were injured during stone pelting between the police and protesters. Given all the facade the Jamia student body claims to have no participation or role in the protests. They believe a certain group of ‘unknowns’ joined the protests to make it violent.

The tension in the Jamia Nagar region of Delhi continues to dwell.

Tara Sutaria and Aadar Jain in love, here’s the proof
Chhapaak Vs Tanhaji Vs Darbar: 2020 To Start With A Big Box Office Clash
To Top