Actress Vaani Kapoor gets trolled for wearing plunging neckline with ‘Ram’ on a revealing crop top. A Mumbai resident filed a complaint against the actress for ‘hurting religious sentiments’ by posting a picture on Instagram.

The 31-year-old Vaani Kapoor has been in the news for all the wrong reasons. The ‘Shudh Desi Romance’ actress has been trolled for wearing a plunging neckline crop top with ‘Ram’ on it.

The actress had earlier shared pictures of her wearing the plunging top on Instagram. Rama Sawant, a Mumbai resident filed an official complaint against Vaani Kapoor at the NM Joshi Marg Police Station. As per the Mumbai Police Commissioner.

Tthe actress has been responsible for  ‘hurting religious sentiments’ by wearing a skimpy outfit. The now-deleted picture has already gone viral on the internet making Vaani a soft target for trolls.

As per the complainant, she came across a photograph of Vaani Kapoor on Instagram. In the picture, Vaani Kapoor was seen dressed in a low neckline crop top that revealed most parts from her shoulder to breasts. The top has ‘Ram’ written all over it which hurt her sentiments the most. Rama is an ardent believer of Lord Shri Ram irked her to file a complaint against the starlet.

The fans have been quick to get disappointed and leave derogatory remarks for her on the now-deleted post on Instagram. 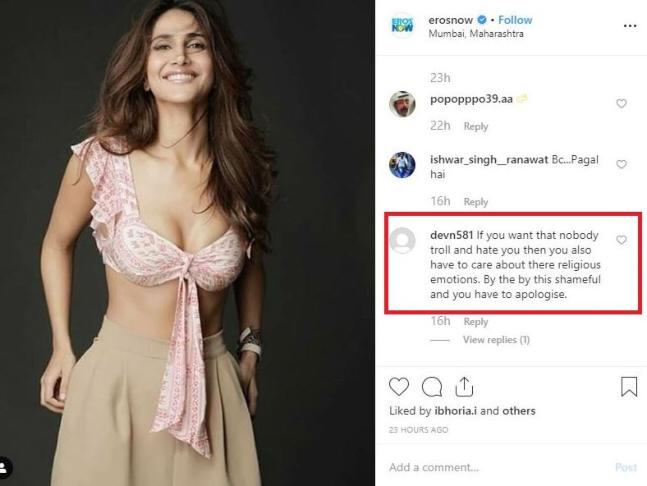 In other news, a video of Vaani Kapoor and Priyanka Chopra having a great time dancing it off to ‘Ghungroo Toot Gaye’ from ‘WAR’ is seen going viral of the internet. Both the stars are seen dressed in shiny satin dresses and shaking a leg at what looks like a rooftop party.

On the work front, Vaani was last seen in her sizzling and sexy avatar in Yash Raj Film’s 2019 super hit ‘WAR’ starring Hrithik Roshan and Tiger Shroff. Breaking Box Office records, the film went on to collect over Rs 300 crores in its lifetime.