New-age Bollywood stars Alia Bhatt and Varun Dhawan finally talk about the gruesome masked-mob attack at JNU Campus on Sunday. While Alia took to Instagram Stories to share her two-cents, Varun said staying netral was not an option.

After Deepika Padukone attended the JNU protests in Delhi, A-listers Alia Bhatt and Vaun Dhawan too came out (only on social media) to extend support to the victimized students of JNU. The ‘Student of the Year’ stars had been silent for weeks after the CAA and NRC came into existence. This time around, it seems the stars are finally affected by the violent attacks at innocent students and teachers of Jawaharlal Nehru University.

Ali Bhatt took to her Instagram Stories to share her piece of mind. In a series of Insta Stories, Alia mentioned that it is foolish of us to believe that everything is normal at a time when teachers and students were physically attacked out of nowhere. According to Ms Bhatt we are a ‘house at war with itself’. She said it was time to stand up against any ideology that divides, oppresses and promotes violence in the country. 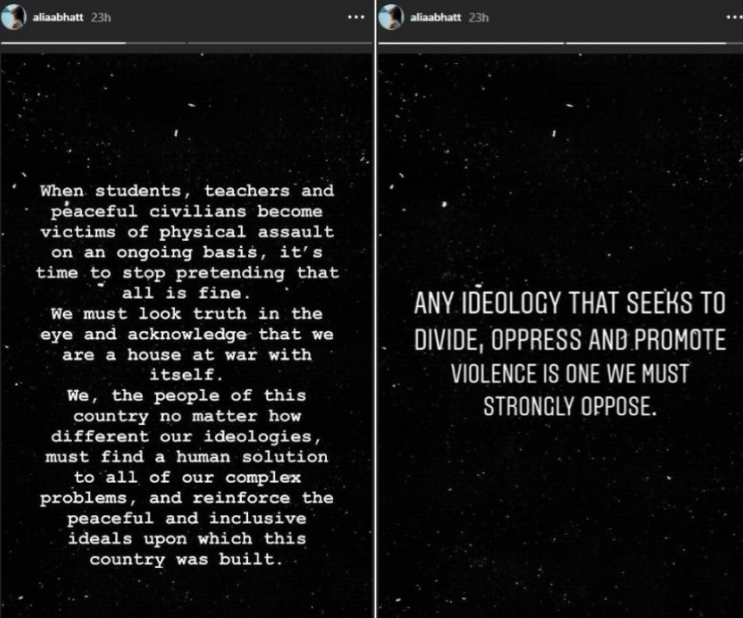 On the other hand, Varun Dhawan opened up about the attacks during the promotions of his upcoming film ‘Street Dancer 3D’. Talking to a reporter, he said “I think we cannot stay neutral in such issues. You have to condemn such attacks. It is dangerous and sad if masked people enter an educational institution and all this (assault, vandalism) happens.”

The Bollywood fraternity had been under the spotlight for weeks because of their lack of empathy and knowledge on the national subject of CAA and NRC. The Twitterati has been outraged especially with those Bollywood stars who took the infamous selfie with PM Narendra Modi.  The micro-blogging site has been exploding with trends like #ShameOnBollywood and #BoycottBollywood because fans demand an answer, a stance and a standpoint from their favorite celebs.

Ever since the furious fans started questioning, more and ore Bollywood biggies joined the protests and shared their solidarity with the JNU students through social media or physical protests. The city of Mumbai saw one of the biggest silent protests in the country on Tuesday. The Mumbai locals were joined by renowned Bollywood names like Anurag Kashyap, Vishal Bhardwaj Taapsee Pannu, Dia Mirza, Anubhav Sinha, Gauahar Khan, Richa Chaddha, Zoya Akhtar and stand up comedian Ankur Pathak. It seems Bollywood is finally waking up to the biggest massacre in the country.

However, the anti-Bollywood clan on Twitter is beating the stars left and right for opening up. They claim all the stars have only opened up about the matter to feed their underlying interests. For instance, Deepika Padukone was slammed for joining the protests as a part of publicity stunts for her upcoming film ‘Chhapaak’. The actress and related hashtags have been trending on top on the micro-blogging site.